A forum to discuss all things Occult in a safe, open-source environment! 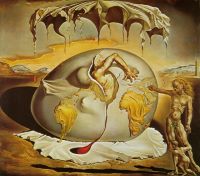 LIBER AL VEL LEGIS reveals that when the (8) R/P poles interrelate nonlinear, the sphere of SelfConsciousNess comes about.

Its poles inter/extrapolate in three phases: (4~6) is called cognition (3~7) understanding (2~8) self-knowledge -
5 marks the Point of View and (1~1) the R/P equation* of SelfConsciousNess.

LAL I & II describes their interrelationship as the following:
I
1. Had! The manifestation of Nuit.
II
2. The unveiling of the company of heaven.
3. In the sphere I am everywhere the centre, as she, the circumference, is nowhere found.
4. Yet she shall be known & I never.
I
6. Be thou Hadit, my secret centre, my heart & my tongue!
II
6. I am the flame that burns in every heart of man, and in the core of every star. I am Life, and the giver of Life,
yet therefore is the knowledge of me the knowledge of death.
7. I am the Magician and the Exorcist. I am the axle of the wheel, and the cube in the circle.
"Come unto me" is a foolish word: for it is I that go.

Every R/P system has particular Self-concepts and ways of realisation. Dualism has its Egos, the old Egyptians their Horuses, while Hindus & Buddhists are still arguing if there are three or four versions of Atman.

Its Law is Do what thou Will – Love under Will.

Will is the power of creation and Love the power that unites its manifestations.

Both emanate from the inter/extrapolation of ConsciousNess and thus are complementary.

When Will gets corrupted, Love deteriorates to compassion, the breading ground of we-are-all-the-same-&-same-rights-for-all-ideologies,
which are also attempts to unite, but unpractical, self-deceptive and what’s more: they are denials of the individual (lat: the indivisible)
and its (only) right (and obligation) to realize itself according to its Love & Will.

Do what thou Will is possibly the oldest and most original manner of Selfrealisation, as it entails the cognition that one reflects what one projects and the realisation that Self comprises All.

“Find yourself to be the centre of your own Universe:
Explore the Nature and Powers of your own Being.
This includes everything which is, or can be for you: and you must accept everything exactly as it is in itself,
as one of the factors which go to make up your True Self. This True Self thus ultimately includes all things so ever:
its discovery is Initiation (the travelling inwards) and as its Nature is to move continually,
it must be understood not as static, but as dynamic, not as a Noun but as a Verb.”

Jump to
All times are UTC